The Australian oil and gas company Santos, operator of the Bayu-Undan project, wants to implement a project for Carbon Capture and Storage (CCS) in the Bayu-Undan field after it is exhausted in 2023 or 2024. This means that carbon dioxide (CO2), an unwanted byproduct of natural gas production, will be stored in the ground under Timor-Leste’s waters.

Santos’ CCS project intends to use the empty Bayu-Undan reservoir to store CO2 from its Australian Barossa gas project, which will pipe unprocessed gas to the Darwin LNG plant and pipe CO2 back to Bayu-Undan. Timor-Leste will not benefit from Barossa gas – but Santos hopes that Timor-Leste will provide a place to dump emissions from its project.

Santos has a big problem, because the natural gas from Barossa has a very high CO2 content. The company is responsible for its greenhouse gas emissions, and is looking for a way to sell natural gas from a project which will significantly worsen climate change. Santos itself has promised to achieve “net zero” emissions by 2040, meaning that it needs to find a way to “cancel” its emissions by doing something like CCS.  Unfortunately, the “net zero” concept could allow the company to continue to produce dangerous emissions and undertake new oil and gas projects, even though many experts have concluded that the world cannot begin new fossil fuel projects if we are to avoid worsening climate disaster.

In June 2021, La’o Hamutuk published an article questioning the CCS plan because it undercuts the principle of climate justice and will negatively impact on Timor-Leste and the global climate.[1] This is already a public and worldwide concern, because human activities, especially extractive industries, are changing our climate, creating a serious crisis for humanity.

The Barossa field is not yet developed, but Santos would like to begin production in 2025. However, Santos is being pressured to keep its commitment to ‘net zero’ by not increasing its greenhouse gas emissions. Therefore, Santos proposed this CCS plan to enable Barossa to go ahead.  In reality, CCS technology is not yet effective enough to capture and store most emissions, and it will not capture many emissions from production, transport and use of natural gas, which is difficult to control. Estimates show that the Bayu-Undan CCS project will only reduce the emissions from Barossa gas production by 28%.[2]  CCS is not an effective or fair solution; a better option would be not to develop new oil and gas projects, to avoid producing emissions from extraction, processing or consumption, in order to save our planet from serious risks in coming years.

In September 2021, Santos and Timor-Leste’s National Petroleum and Minerals Authority (ANPM) signed a Memorandum of Understanding to begin discussing the possibility of using Bayu-Undan to store carbon. This MOU is an initial conversation without legal force, and is not a decision to move ahead. Nevertheless, Santos is seeking approval from the Northern Territory (Australia) Environmental Protection Authority (NTEPA), even though the CCS project will be in the sovereign territory of Timor-Leste.

On 15 February 2022, La’o Hamutuk wrote a submission asking NTEPA to look at Santos’ CCS proposal holistically, and to analyze it deeply, rather than only looking at Santos’ interests.[3]  Environmental authorities have the responsibility and the power to protect their own people, their neighbors and the entire world, and they should be cautious about adding pollution to the atmosphere which continues to create disasters for humanity.

We are also concerned about issues discussed in the meeting between the Prime Ministers of Timor-Leste and Australia, such as “to deepen links between Australia and Timor-Leste in gas development and trade, including in the use of carbon capture and storage.”[4]  We hope that the ideas we mentioned above are considered before undertaking this risk. We trust the Government of Timor-Leste will not blindly accept corporate requests to move ahead with the CCS and Barossa projects, but will carefully weigh local and global aspects so as not to contribute more to the escalating environmental crisis.

Climate change already has many impacts and is our reality. For example, in March 2020 and April 2021, Timor-Leste was hit with disastrous flooding which killed more than 40 people, displaced more than 15,000, and destroyed many households’ possessions. We already experience unpredictable wet seasons, heavy rains, droughts and floods which exacerbate hunger and poverty for our people.

Therefore, each of us is obliged to look more deeply into climate change, beginning with the dominant factors which contribute the most. Global efforts to move away from production and use of fossil fuels are the fairest solution to help bring our planet back to stability and peace.

La’o Hamutuk believes that the strongest and most sustainable option is to invest in our people, through renewable, transforming industries, rather than always looking to the oil and gas industry which is not sustainable and damages our atmosphere and the global climate. 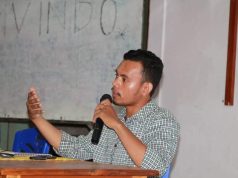