Ros Dunlop is a professional clarinetist, a music advocate, a human rights activist and researcher from New South Wales, Australia. She is married to Don Bennetts and she has three children, Ella, Harry and Lillie. She has been teaching at the Conservatorium of Music in Sydney for the last 26 years. She did her PhD on the traditional music of Timor and its relationship with Lulik. She had collaborated with many composers and performers, commissioning, recording and playing music all over the world. She played a number of audio-visual pieces of Martin Wesley-Smith‘s about Timor-Leste’s struggle for independence. She played these pieces all over the world including in Timor-Leste in 2003.

She went to Topu Honis four times, twice with her children and twice on her own. Her husband Don Bennetts also went to the shelter on a separate trip on his own.

Ros and her family provide some financial support to Topu Honis and musical sound system to the community of Kutet, Oecusse.  When Richard Daschbach’ sexual abuse case became public, Ros was shocked and felt betrayed by the amicability offered by Richard Daschbach at Topu Honis. She feel very angry and very upset for the children and the victims of Richard Dascbach’s abuse. She contacted Neon Metin about her observation during her visits to Topu Honis and Neon Metin offered her space to share her story and reflection about what she saw at Topu Honis.

Ros’ recollection and reflection on her visits reveal that there is more to it in Topu Honis than what meets the eyes. The following is an exclusive interview with Ros Dunlop.

Neon Metin: How many times have you visited Topu Honis, Kutet? What is your impression about the people, their life and culture?

Ros Dunlop: I visited Topu Honis four times in total, twice with my children and twice on my own. My husband also went on a separate trip on his own. Each time I’ve visited the community of Topu Honis, they were very welcoming, very friendly and the children always happy to engage with me, whether I was just talking to them, or playing with them or playing music, because I took my clarinet every time.

The children were very happy always to see me, they really loved our kids and they got on very well. The staffs were also welcoming and friendly because the people seem to be very open with me. Anyway, this is clearly a farming community, just as all over East Timor, family groups were always sharing different tasks with regards to work. There didn’t seem to be gender specific tasks.

Neon Metin: Did you ever meet Richard Daschbach in person? What did you think back then, when you met with Daschbach?

Ros Dunlop: Yes I did meet Richard Dashbach from the very first time I came to Oecussi and Topu Honis. My impressions, to start with, this was a person who seemed very dedicated to the community and children in his care. He was very interested in the local culture and clearly the community of Kutet, Oecusse and down below at Mahata treated Richard Dashbach as one of their own members of the community.

Richard was very engaging and chatty with me from the start of our association and friendship. He gave me a lot of information and support about the local culture particularly the music. We shared quite a bit in common in terms of our interest in music and literature.

He got on very well with my family a particular my husband. We would go for walks together and he talk about his time in Kutet, from the point of view of how he started there during the occupation and also the period of resistance and beyond.

I didn’t see anything amiss at that at the time, in fact all the times that I was at Topu Honis. He seemed always genuinely happy to see me and my husband. He loved that our kids would mix with the other kids, and they had some good times together.

I have to say at this point when I found out about his pedophilia, apart from being completely shocked, I felt completely betrayed as someone who thought they were friend of this person. Clearly I really didn’t know him at all. And of course I feel very angry and very upset for the children and the victims of his abuse.

Neon Metin: And now, after you heard about the case of sexual abuse to minors in Topu Honis, what is your recollection about past memories with Richard Daschbach and the children of Topu Honis? Anything in particular you noticed back then?

Ros Dunlop: Of course looking back, after discovering something like that, I mean the sexual abuse – pedophilia certain things make more sense. But in the times when I visited, you know, he was a friend and we trusted him, and ultimately were betrayed by him.

So I can confirm that every night there were prayers. Every night a different child girl would sit on his lap. And at lunch, after lunchtime and in the evening after the prayers when everyone was going to bed, it would be girls going into his bedroom. But as there was a group of girls, we just thought it was just these kids we just saw playing, and you know, bit like in a family. Anyhow that wasn’t the case at all, as it turns out.

Like all pedophiles they are very good at hiding what they do from those who are around them. That makes it even more shocking. I do think there probably will be difficulties in this trial because of the love the community of Oecussi and Kutet have for him, and I imagine there are people who do believe it and don’t believe what he has done. I don’t envy the task of those trying to seek justice for these crimes. I imagine the community has become quite divided over this.

Neon Metin: What do you think needs to happen now, with the Church, Government of Timor-Leste, justice process and the victims?

Ros Dunlop: Goodness, I have no idea what will happen now. From what I hear in the press or read in the press through mostly ETAN, it seems there is a lot of support for Richard Dashbach. It’s very difficult in a country where most of the population follows Catholicism where priests are assessed fairly on a fairly high pedestal. I have often found the Adulation of The clergy by the Timorese difficult to comprehend as someone who is not a Catholic but as someone also who treats people equally. The kissing of hands by the population to priests, etc, I find that difficult. It seems to go against the 10 commandments. These people are supposed to be carers. From the priests and nuns, they supposed to look after the poor, but they’re supposed to look after the poor as same with them, and yet the community and Timor set them so high in the community or with high regard.

I am not sure what the situation is with regard to how the Government thinks.  I’m sure will be people who feel that Richard Dashbach did a lot to help the people. After occupation, during 1999, the Oecusse people regarded him as a hero. So, for those people, it is hard to accept that your heroes are also just men.

I sincerely hope justice will be done so that there is some or can be some closure for the victims. But of course we all know that people who have been abused as children can often be fragile adults. They will need help and support of the community so they can develop into healthy and happy adults and also feel that they are worthwhile. My heart goes out to the girls abused, I sent them a lot of strength and love.

* To know more about Ros Dunlop and her work, please visit Tekee Media Inc at http://tekeemedia.com 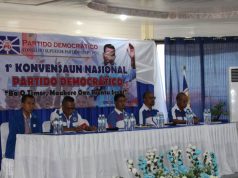